The Summertime Photography Scavenger Hunt : The Final Link Up

Mary-Lou at Patiopostcards has kindly hosted the photo hunt again this summer.  I haven't been able to give the hunt quite the undivided attention I would like to have done but I have managed to scramble together a bit of a collection. I always find it hard to make the final selection and so I have taken the easy way out and on some occasions chosen two! So here goes.
No. 1 An Outdoor Clock.
This clock is in the stable block at Landhydrock House in Cornwall. Imagine how important it must have been to all the grooms and coachmen to make sure that all mounts and coaches were ready on time. 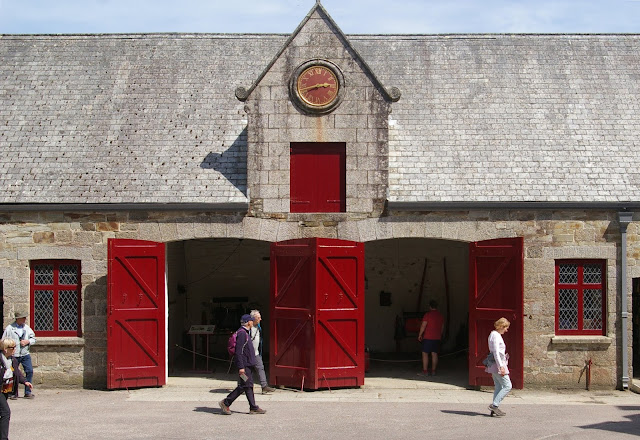 My second choice is a very early type of clock with no mechanism to go wrong. It is however dependent on a little sunshine. This particular one is in a local churchyard on a gravestone. 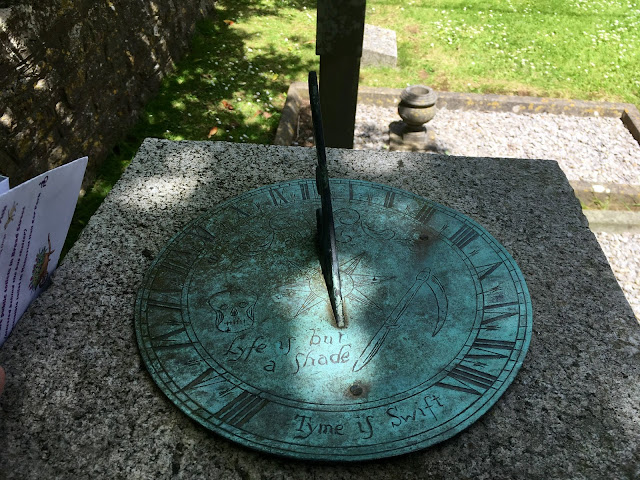 No. 2 Single and Pretty.
I was delighted with these poppies which grew from some seeds that I collected last year. 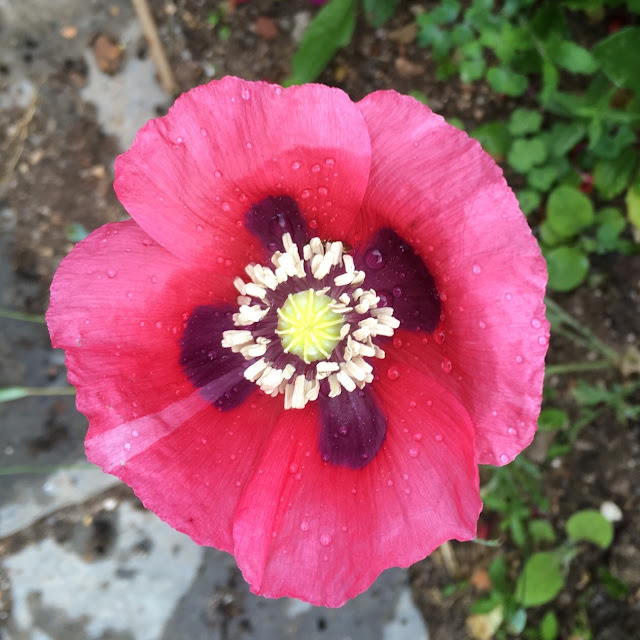 No. 3 Repetition.
A common sight in fishing harbours are the stacked lobster pots. They are not particularly attractive but give an evocative feel. These were taken at Lulworth Cove. 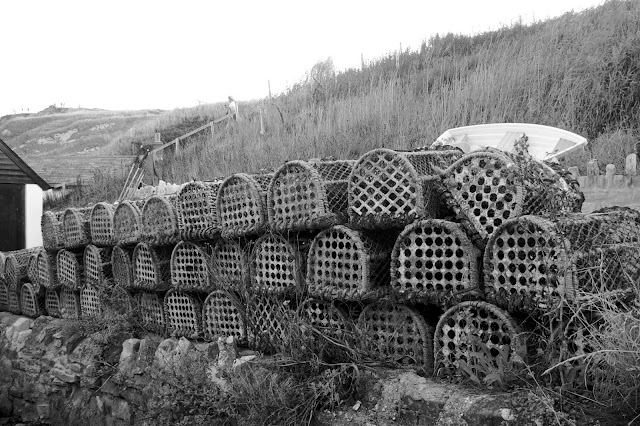 No. 4 Blurred Vision
The cosmos planted outside our kitchen window make an unfocused background to the agapanthus seed heads. 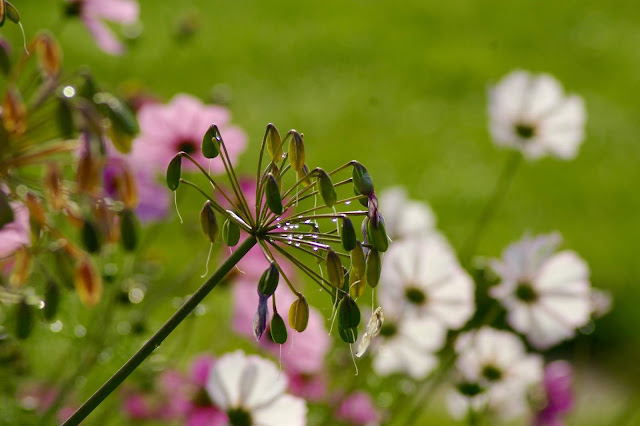 No. 5. The Word Summer
I am sure that if I was more observant I could have found a better photo for this one. The very British store Marks and Spencer's had many signs like this to advertise their summer slogan. 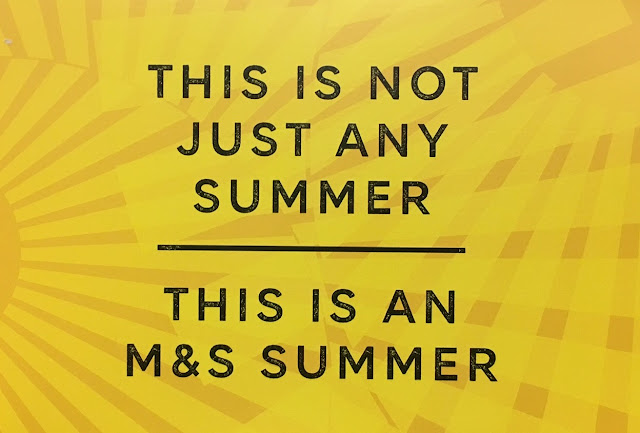 No. 6. An Umbrella Open or Closed.
The beer garden of a harbour pub in Porthleven was well prepared back in May for the forthcoming hot weather. Perhaps this would qualify for repetition too. 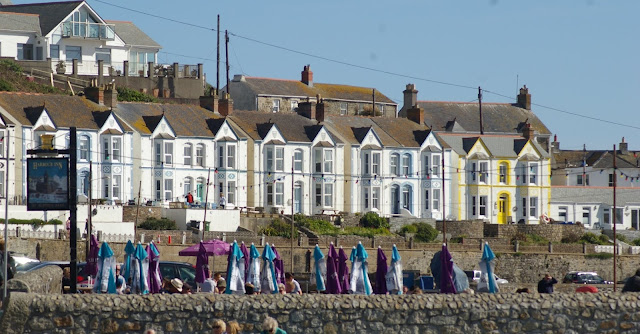 No.7 A Curving Path.
One of the many paths exploring the beautiful gardens at Lanhydrock House. 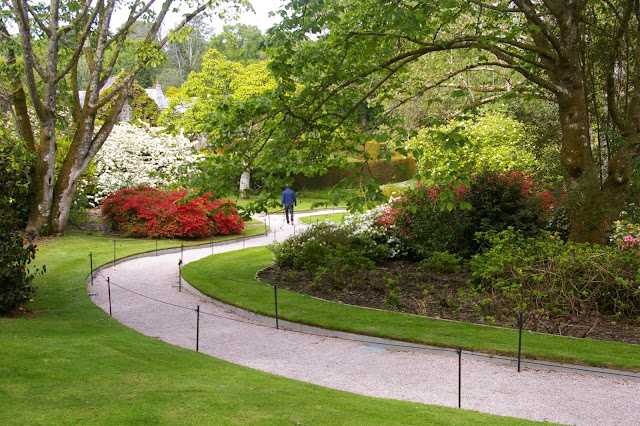 No. 8. Shells.
These snails were all collected in a shady aspect of this tree. 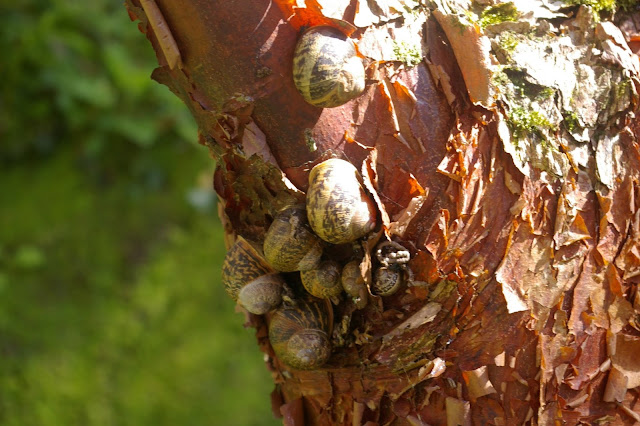 My first thought however when I initially read the prompt was sea shells so here is a single shell washed up on the sand at Treyarnon Bay. 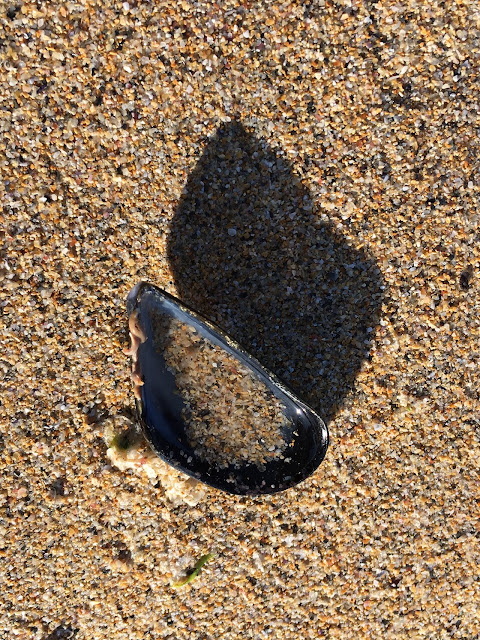 No. 9 A Bridge.
There are so many lovely bridges around but I seemed to have failed to capture them. This Monet type bridge was a feature in a garden in Wrington on an Open Garden day but it was almost impossible to pick a moment with no people. 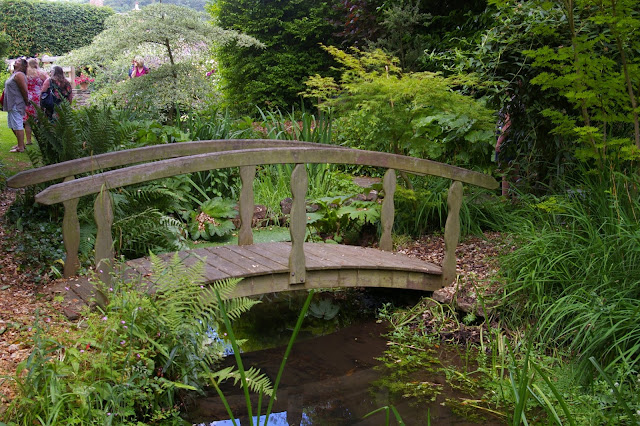 This is City Bridge in Winchester where there is a beautiful walk along the river. 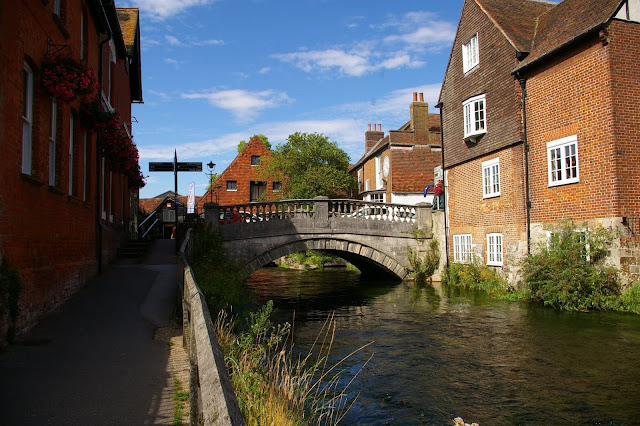 No. 10. Something Made from Stone
Stanton Drew is a village in the Chew Valley which boasts its own mini Stonehenge, a stone circle in a field on the edge of the village. There are also three stones known as the Cove behind the church in the beer garden of the aptly named Druids Arms. This picture shows two of them dating from 3000 years BC. Local legend has it that a wedding party were dancing after midnight on a Saturday night and hence into Sunday. They were egged on by the devil in the form of a fiddler. They were consequently all turned to stone. The guests are the stone circle and the three by the church are the bride, groom and vicar.
On the left of my photo is the 13th century parish church also made of stone over 4000 years later. 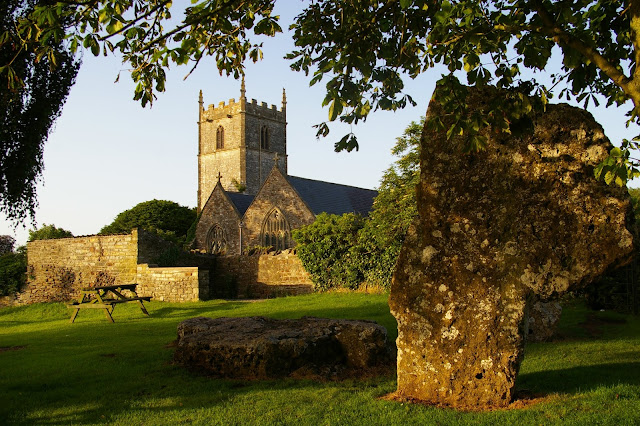 No. 11 Fish.
I haven't done very well on this one. These decorative tiles adorn the walls in one of the bathrooms in Trerice House near Newquay. 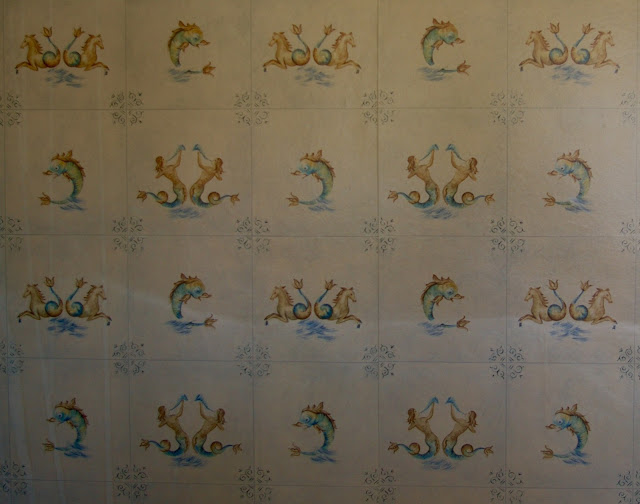 No.12 Something Crooked.
Age has given this Celtic cross a bit of a slant. 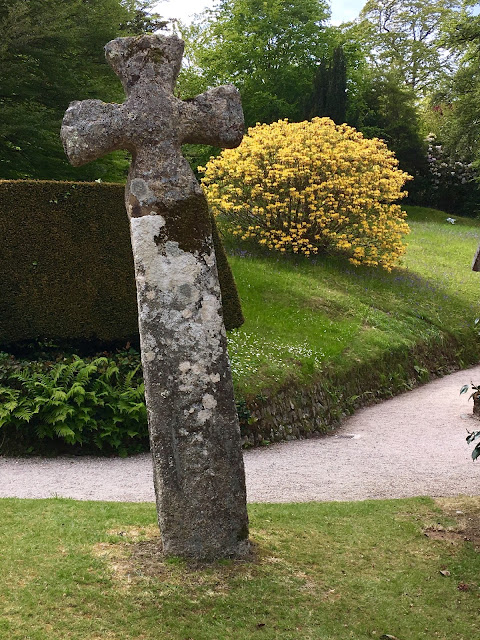 The crinkle crankle wall at Newark Park in Gloucestershire is deliberately made in a crooked manner. 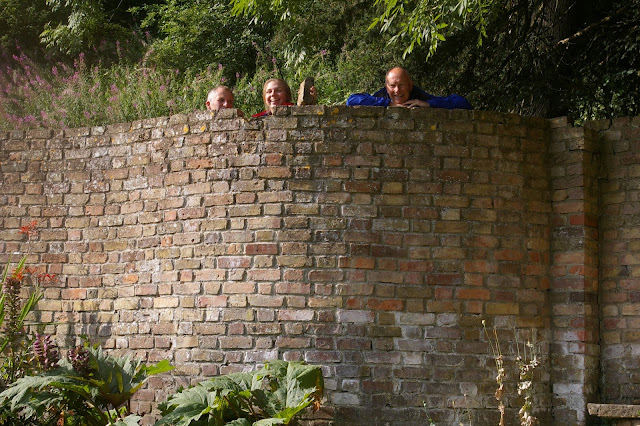 No.13. Two Colours of the Rainbow in Any Combination.
I snapped this traction engine wheel during a visit to the Great Dorset Steam Fair. 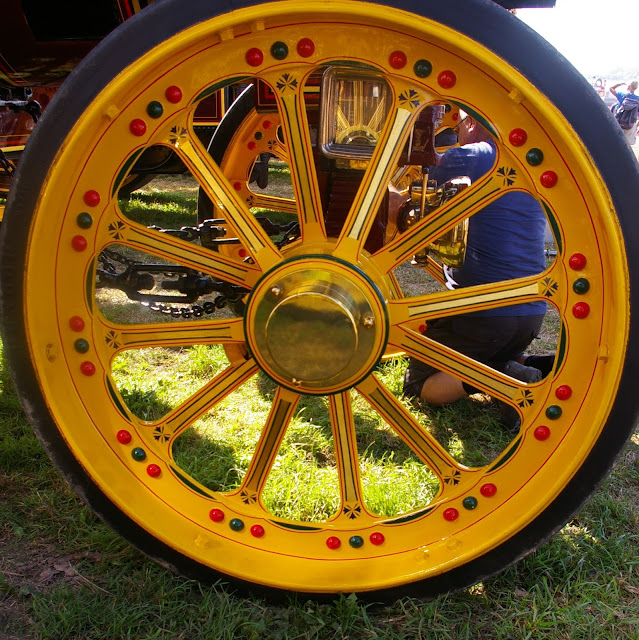 Then in nature red and orange naturally go together. 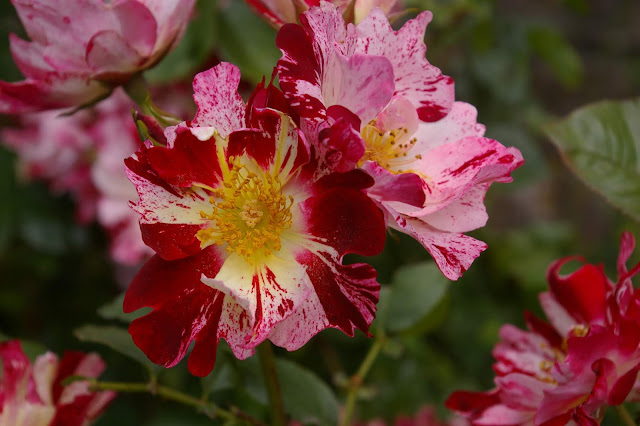 No. 14 A Handwritten Sign.
Look carefully at the small signs in this exhibition. Spelling was not the exhibitors forte! 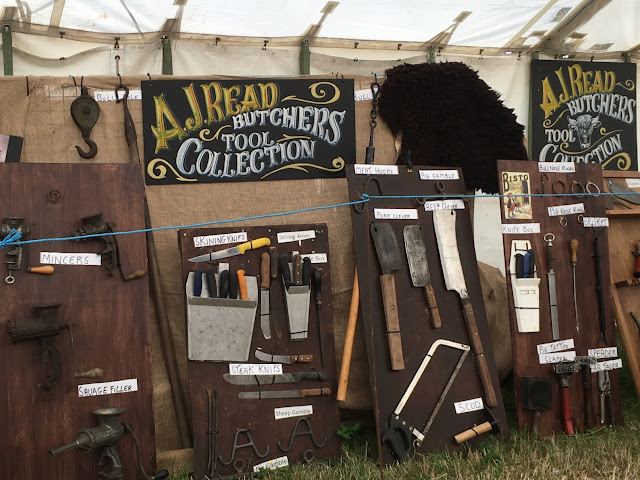 No.15 A Broken Chair/Bench/Stool.
Weather conditions on the North Cornish coast must make the maintenance of these donated benches a nightmare. 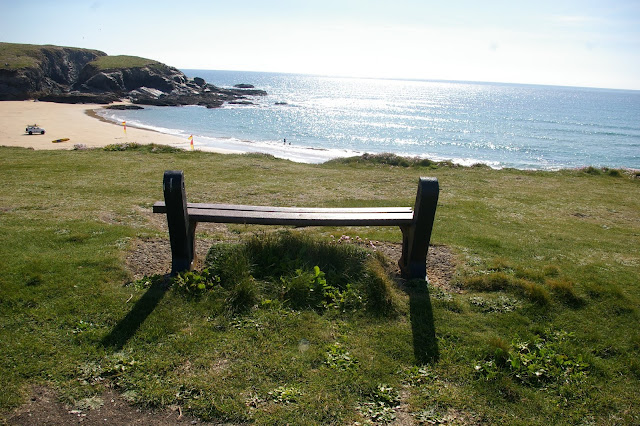 No. 16 An Out of Season Treat Being Enjoyed.
So who actually wants winter cranberry and cinnamon in the middle of summer? 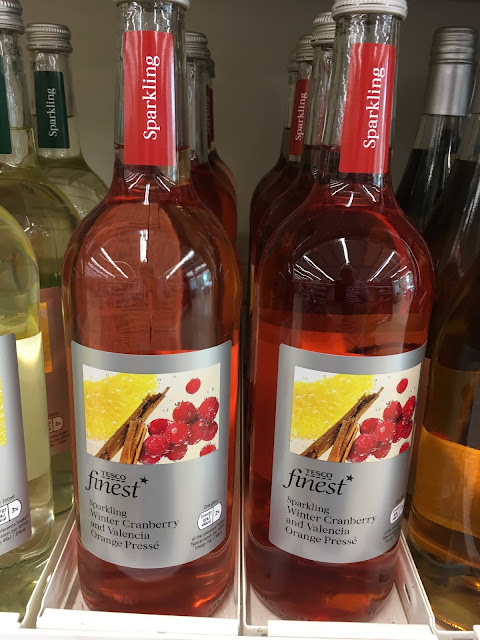 No.17 A Sail
Yes I know. Not a sail in sight on these boats in Padstow harbour but they must have them on board mustn't they? 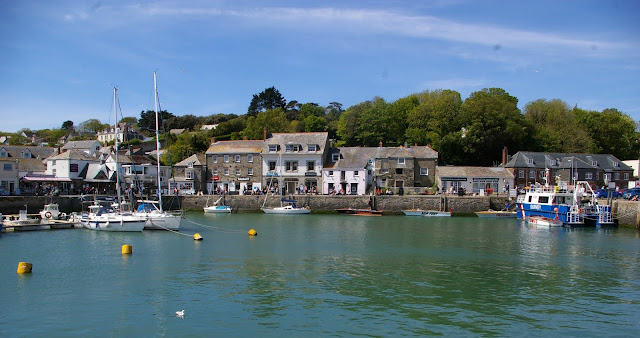 No. 18. Something that Should be Found in Pairs.
A bit of polishing needed here. A job for the man servant this evening. 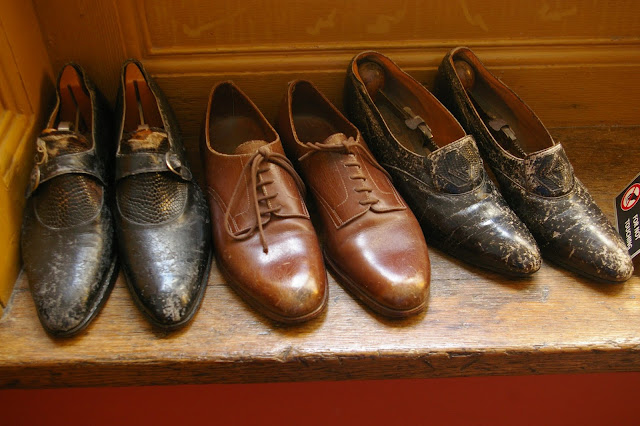 No. 19 A Funny or Meaningful Bumper Sticker.
This reminds me a bit of the joke "Why does a Skoda have the luxury of a heated rear window?"
"To keep your hands warm when giving it a push!". 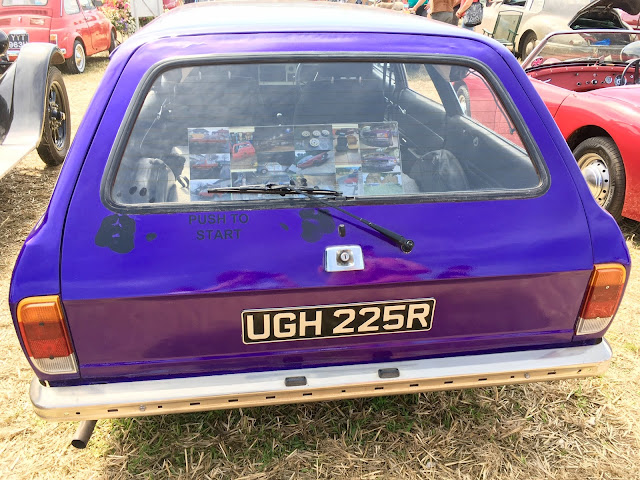 No. 20 A Favourite Seasonal Scent.
This may seem an odd choice but my father was a great steam engine enthusiast. The smells of engine smoke evoked a lot of memories for me of trips to steam engines and my dad's model steam railway in our garden. A huge part of my very happy childhood. 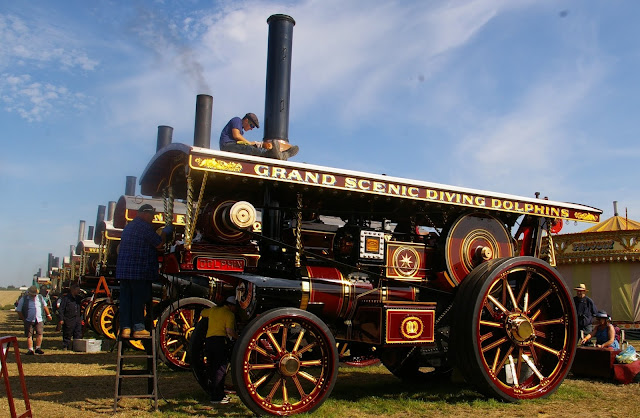 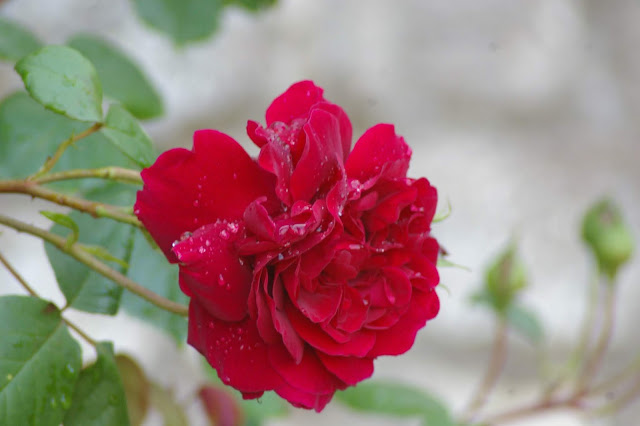 Alternate A : A Bird or Bee House.
My niece has two bee hives which are currently on the farm. My daughter helped out one evening removing some redundant comb. The suit was an important requisite. 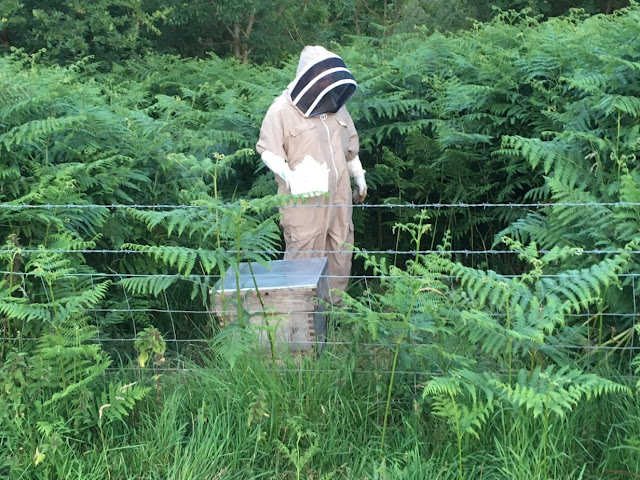 Alternate B : Fresh Local Produce.
Cheddar strawberries washed and drying ready to serve at the June lunch club for the elderly. 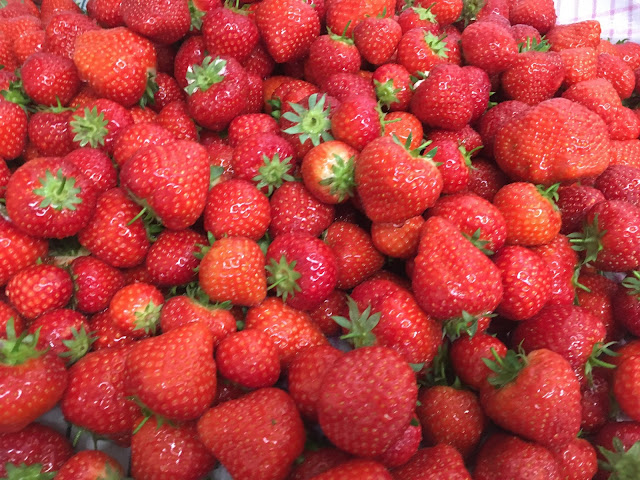 Many thanks to Mary Lou for hosting this and now I'm coming your way to have a look at your finds!